Velvet Caravan’s unique ability to subtly shift musical gears without sacrificing their integrity as composers and performers is rare indeed. This has resulted in an envelope-pushing group that’s just as successful at dazzling jaded cocktail drinkers as they are at commanding the rapt attention of serious music aficionados in whisper-quiet recital environments. Of late, the band has even taken things a step further, by mesmerizing and inspiring even the most finicky of schoolchildren through fun and engaging music educational programming.
Since it’s beginning, Velvet Caravan’s journey has continued to gain momentum, as its reputation for top-notch virtuosity and unforgettable live shows has become the band’s unique global brand. Praised for its “compositional whimsy and ferocious technique” (The Austin Chronicle), Velvet Caravan “brings together musicians from as close as Austin and as far away as Venezuela and Slovenia. The quintet’s varied lineage contributes to its eclectic sound, as the group weaves thick threads of Latin and gypsy music into acoustic swing jazz” (The Austin Chronicle). Whether on the big stage with a full orchestra or in an intimate jazz club, the band remains “tight and vibrantly free. Velvet Caravan pours violin, acoustic guitar, upright bass, accordion, keyboard and percussion into a gumbo of lively swing music.” (Creative Loafing, Atlanta)

As a national and international touring ensemble, the band still calls Savannah, Georgia it’s home, bringing a bit of southern charm and coastal coolness to their music. If one were to name one Savannah-based musical act that most exemplifies this time-honored, eclectic and adventurous city, they’d be hard to find a more appropriate ambassador than Velvet Caravan.

This unorthodox, high-energy, acoustic-based quintet has, over the past few years, emerged as one of the shining lights of the Coastal Empire’s burgeoning music scene. In that time, the band has grown to perform as an instrumental combo which routinely drew enthusiastic and loyal followers at raucous restaurants and jazz clubs to a respected and admired touring act that’s comfortable in an attentive listening room or large concert hall. They have recently built their show to occasionally collaborate with vocalists, orchestras, and a variety of featured musicians.

This event is supported in part by a grant from the Oshkosh Area Community Foundation and the Wisconsin Arts Board with funds from the State of Wisconsin and the National Endowment for the Arts.

Karan Casey has long been one of the most innovative, provocative and imitated voices in Irish traditional and folk music. Her career has spanned twenty five years from the early days as a jazz performer in George’s Bistro in Dublin to her heady days in New York with the band Solas to her now established solo career and she has sold over half a million albums.
Karan released her first album with the group Solas, which quickly became the most celebrated Irish band in the U.S., and her four years with the group were pivotal. Since embarking on her solo career Karan has released 6 solo albums, a duo album (with John Doyle), an album for children and numerous contributions to other artists’ projects – appearing on more than 50 albums in total. She has toured constantly throughout North America, Europe and Japan, performing solo, with her own band and with many other diverse artists.

This event is supported in part by a grant from the Oshkosh Area Community Foundation and the Wisconsin Arts Board with funds from the State of Wisconsin and the National Endowment for the Arts. 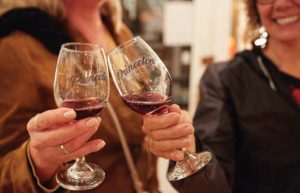 Join the Princeton Chamber of Commerce for a walk around the town with a twist! Our Wine Walk will showcase local business. for more information call 920-295-3877

Join us for a good old fashioned meat raffle at BeerBellys in Princeton to benefit the Thrasher Opera House during our Missoula Children’s Theatre weeks! Thrasher hosts Missoula twice per year and to allow children to participate for free, year after year, we are always in need of funding assistance! Please join us to help support this wonderful program for our local youth!